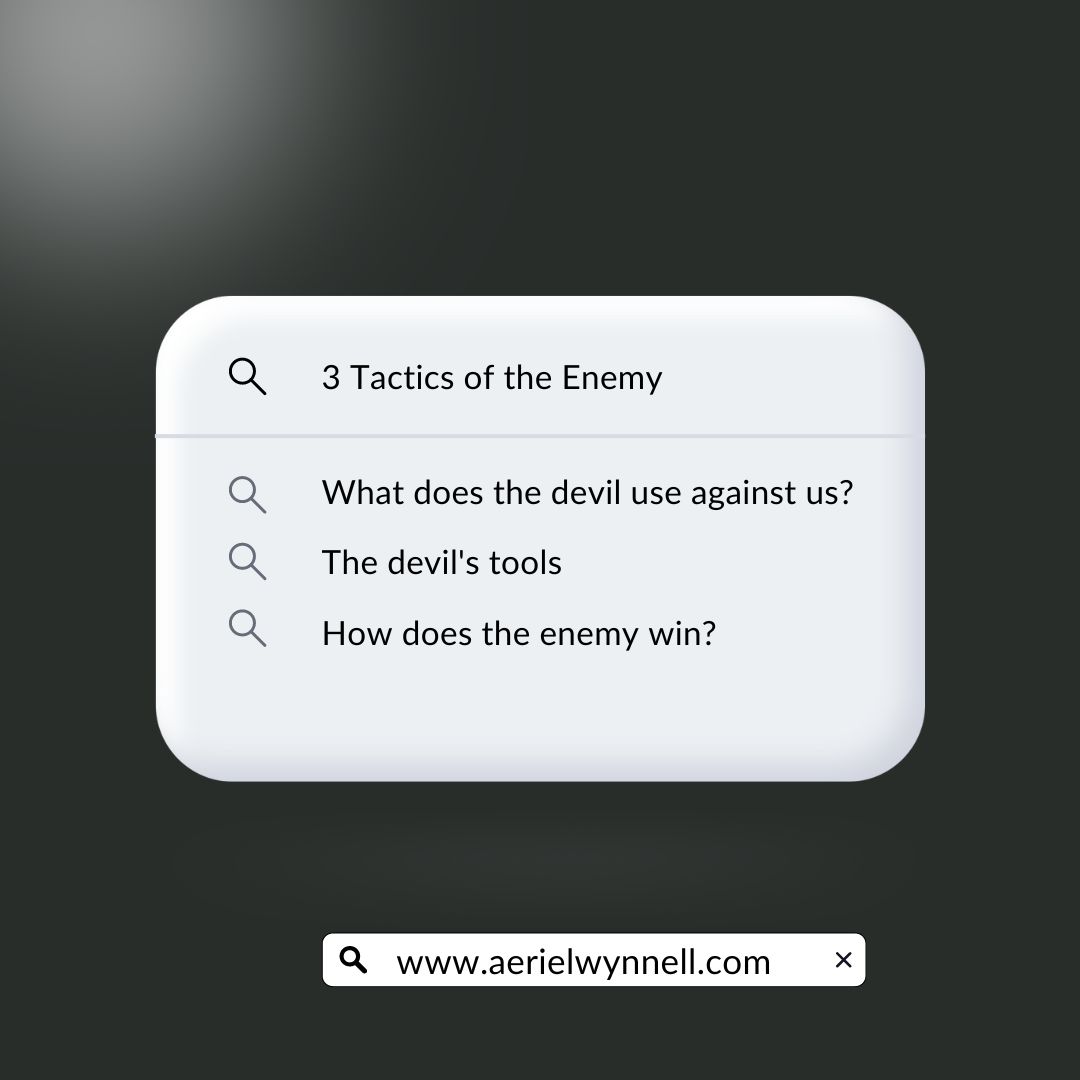 The thief comes to steal, kill & destroy; I have come to that may have life, and have it to the full.

Welcome to 2023. So far, so good right? If not, I hope things get better for you and yours. As a matter of fact, this post may be for you. In the new year, most people plan goals for the rest of the year, and while I’m not objecting to doing just that, I’d like to insert a few words of encouragement between your resolutions. Before we get too far into the year, I wanted to begin with a post that’ll equip you for the enemy’s attacks because if it’s not self-sabotage or God blocking you, it’ll be Satan trying to fight your progress. Most of us, if not all of us as Christians, have heard this verse before. We’ve repeatedly repeated it and heard pastors and relatives say it; but have we really taken the time to understand what that means? What does an attack of the enemy or in this case, Satan, look like? The scripture above says he has only 3 tactics: Steal, kill and destroy. At first glance, they all look the same but after looking at each individually we can see the uniqueness in each one.

1Steal: ” To take or appropriate without right or leave and with intent to keep or make use of wrongfully.” b) “To take away by force or unjust means.” d) “To appropriate to oneself or beyond one’s proper share: make oneself the focus of.” 3(a): “To seize, gain, or win by trickery, skill or daring.”

While we know that Satan is a thief, we must understand what he decides to steal that allows him to steal everything else. Satan is a thief of the truth first and foremost. When you think of it, that causes death and destruction. Satan is known as “the father of lies” (John 8:44). Satan knows the truth which is why he can distort it. He omits information and twists facts to present them to us as facts to invade our emotions and push us to make decisions that distract and destroy God’s people. We see this in the Garden of Eden with Adam and Eve. In Genesis 3, we witness the conversation between Eve, God’s latest creation, and Satan, in the form of a snake. Here he takes God’s instruction, twists it, and questions it to Eve, who knew exactly what God spoke but it’s easy to hear differently when information justifies what we want to do. Satan pointed out how the fruit looked good to eat and how it’d increase her knowledge and it did, but not in the way she assumed. The same goes for the rest of us, believing the lies of the enemy will cause us to become barren.

2Kill: “To deprive of life: cause the death of. b) to slaughter for food

Death is something most of humanity fear from the fear of dying physically or having to die to a habit or lifestyle we’ve connected to for so long, death is a subject most avoid. Satan is very aware of that and using that knowledge he can reconstruct fragments of truth into illusions that can become our perception. The tactic of Satan is to manipulate facts so that we’ll try to make a mistaken thing true in action while simultaneously destroying ourselves. We make decisions based on how we perceive the world and where we are within it. If we’re seeing out of a broken lens, it’s likely we’ll choose things that’ll bring harm believing we’re choosing safety while denying the correct path.

Death occurs to plenty more things than our natural bodies, but to our dreams, our relationship with Christ, healthy relationships, and habits. Death can seem like an all-encompassing horror, that is until it runs into Jesus and the promise His sacrifice secures. Satan has limited power over what he has access to, let alone what he can do (Job 1:10) to us and it’s all under God’s permission. anything that he has killed in us or within our lives, can be resurrected and restored. (John 11:38-44, Matt 9:18-26)

3Destroy: To ruin the structure, organic existence, or condition of.”

Now, you may be thinking to yourself that there isn’t much of a difference between killing something and destroying it, but there’s a small difference and it is something to take notice of and can be used by the enemy. To be destroyed causes the loss of natural function, creates dependence, and distorts usage. It’s one thing to have something stolen from you and something else to be killed, but it’s a distinct form of misery to have something destroyed. Why is it so different then the other two? Simply because you’re left with the remains of something that once was fully operational and learning to accept and recover from that can be breathtaking. When I think of something being destroyed, I think of something a person worked hard to achieve and maintain being ruined suddenly, like becoming paralyzed in an accident or losing your home due to a natural disaster.

Satan will attack not only our person and those attached to us, but what we have. Remember, none of this is limited to tangible items, he will damage whatever we have in order to cripple us. When something we’ve built, invested in and care for is destroyed, it can porpel us into a dark place of helplessness, hopelessness and despiar. We waste time trying to figure out what happened as we collect the rubble around us, mourning what we once had but now are only sourveniers from before. Destruction creates a barrier of then versus now. Comparisson takes our attention and becomes the motivating force in regaining what we had.

In all of these tactics, Satan has the ability to distract, lead astray, kill, steal, lie and manipulate us, but the blessing is knowing that he is only successful if we allow him to win. How do we do that? By abstaining from time with Christ in prayer and studying the Word, in living outside of the standard of Christ and denying His power and authority in your life. You’re not going to read or pray everyday of your life, but strive anyway to build a solid relationship with Christ and while He won’t spare you from trouble, He’ll sustain you during those times. I pray you were blessed by this post, share it with family, friends and strangers. Until next time, keep Christ first and take care!